The Metadata Merger Tool is a new feature added to the Aristotle Registry to help with metadata harmonisation. This tool is useful for merging metadata at the “Audit and Harmonisation” phase of MAST methodology. Admin permissions are needed to use the metadata merger rule.

Target Metadata: This is the metadata into which other metadata gets merged. The merger tool will remove all the linkages from the source metadata and create the same with the target metadata, in addition to the linkages it already has.

Undo feature: This merger tool has an awesome feature to undo the merge at any time. Once the rule is created and executed, you can undo that change by clicking the undo button.

Rules creation: You can use the merger tool to create rules that can be saved and used later. 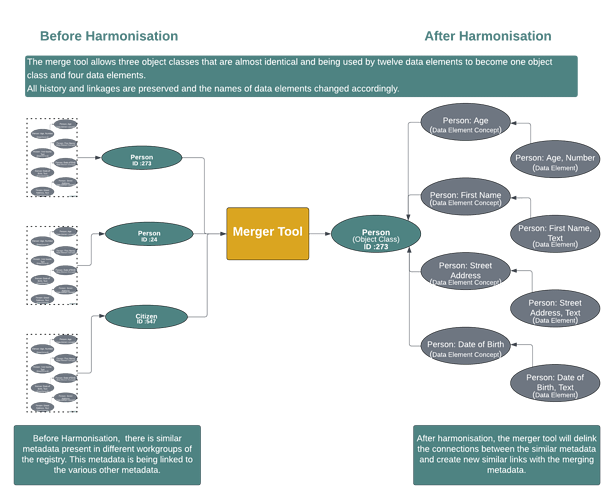 For more information on the Metadata Merger tool, please see the attached pdf.

Thanks very much this is great!

Another question, what happens to the registration status of any items that are merged? To me it seems that all source items should get a status of retired or superseded (or similar).

That’s a really good idea; thanks for that. Currently, the registration status remains the same and gives a message at the top that the item has been merged.

About the registration status, I think we will probably go with ‘retired’ status’ as ‘retired’ means the item is not recommended for use, which we want to achieve in this context, whereas “superseded” status means that the item has been replaced or superseded by the latest version or another item.

Are there plans to have a governance process around the merge. At a minimum, if a registration authority has endorsed the source metadata items as standard, they should need to approve the merge.

We wanted to give admins the ease of merging metadata as required; at the moment, only the admins have access to do the merge, and a few tasks need to be done manually by the admin as per the requirement, but moving forward, for the phase 2 merger tool updates, we would love to implement the governance around the merge.

Thanks again, your suggestions are really helpful.

We have started to work through our first set of merger rules, and have a couple of initial observations:

Thanks, looking good so far, will keep working through our first set of rules and post any other ideas/scenarios we come across.

hey @skew, Thanks for the feedback. I just wanted to let you know that the merger tool is still in beta and that we are working on it. To answer your questions:

In this way, you will be able to see the definition while creating a rule, and if it needs a change, you can either edit the definition by going back to the element or exclude the change from the merging rule by checking the tick box before saving the merge rule.

Using the merger tool, you can only merge the same type of metadata item. Once the object classes have been merged, you can decide which properties to merge based on your analysis and then perform the merge for properties.

You can check for duplicates using the metadata report builder in the toolbox.

Thanks Shikha, that’s great, exactly what I had in mind. The extra info and check options will give us greater control over the merge and ensure we don’t merge things that shouldn’t be, and help identify what other updates to the items might be required.

Something that will help greatly with this might be if the generation of the report can be an option or a part of the merge execution process…? One thing that we were a little worried about was losing visibility of the changed items after merging, in order to be able to make the definition updates etc.

Hey @skew, thanks for the feedback!

by report, do you mean the record of changes that were performed as part of the merge, something like, logs of the merger changes?

As for the visibility of the changed items after merging, you can undo the changes to check the previous definitions. When the merge is executed, it saves a log of the before and after (which is how it knows what to undo). We just don’t have the download option for the log yet, which we would like to include in the next development phase of the merger tool.

Yeah, similar, I was thinking if you can produce a download version of the log that is in the same format as the Bulk Import template, containing at least the ID, Name and Definition of updated items, then it will be easy for us to apply minor definition changes to all impacted items in that spreadsheet, and then apply them via the bulk import.

It sounds like a good idea. I have created a task for this one for the new year and will keep you updated on its progress.